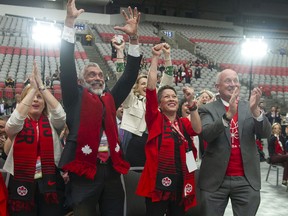 VICTORIA — Four years after Premier John Horgan balked at writing a “blank cheque” to FIFA, he now claims that B.C. stands to gain a billion-dollar payoff from hosting five games in the 2026 World Cup soccer tournament.

“We estimate it could be in the range of a billion dollars and that is significant,” Horgan said last week.

“This is something we wanted to be part of back in 2018,” the soccer fan premier told sports journalists Don Taylor and Rick Dhaliwal on CHEK TV. “It just didn’t work out based on what FIFA” — soccer’s imperious governing body — “was selling at the time.”

In 2018 Horgan made a public stand against FIFA.

“We have been grappling with the proponents who want us to sign a blank cheque,” he said then. “I have to make sure taxpayers aren’t on the hook for unknown costs at the whim of FIFA.”

The premier reaped accolades for wrapping himself in the flag of fiscal discipline.

Then last summer he reversed himself.

“We are coming out of a global pandemic,” he told reporters. “Our tourism sector has been buffeted and the prospect of inviting the world to Vancouver in 2026 all of a sudden takes on a whole new meaning.”

FIFA was now “in a different place,” according to Horgan. The province reopened negotiations.

On June 16 of this year FIFA chose Vancouver as a host city for the Canadian portion of a tournament that will also play out in cities in the U.S. and Mexico. This year’s terms included more games and fewer preconditions, said the New Democrats, though they didn’t release a point-by-point summary of the improvements over 2018.

The blank cheque was replaced by an estimate of between $240 million and $260 million as B.C.’s cost for planning, staging and hosting its share of the Cup.

“There’s going to be a return on that investment,” said Tourism Minister Melanie Mark. “We’re looking at $1 billion coming to B.C.”

Mark’s suggestion of a four-to-one payoff was backed up by a single sentence in her news release:

“Early modelling from Destination B.C. and B.C. Stats estimates that the tournament could bring more than $1 billion in new revenue to B.C.’s tourism sector during the tournament and in the five years following, depending on the number of matches played in Vancouver.”

The five-year timeline may explain how the presumed benefits increased to $1 billion from the estimate of between $90 million and $480 million in a 2018 report to Vancouver city council.

Seeking more detail, I asked the Tourism Ministry for a copy of the latest modelling. The rebuff took only a day.

“The full economic impact assessment report is not public and would need to be requested under the Freedom of Information and Protection of Privacy Act,” I was told.

The formal request would presumably be subject to the notorious $10 application fee, which prompted the Canadian Association of Journalists to name the B.C. government as the most secretive in Canada.

The Tourism Ministry also advised that the economic impact assessment would be subject to “severing” before release. Not hypothetical, given how the same ministry handled the business plan for the $1 billion makeover of the provincial museum. By the time that plan was released to reporters last month, information had been severed from a third of the 100 pages.

The ministry did provide its own, selective summary of the report from the two provincially funded agencies, Destination B.C. and B.C. Stats, on the economic impact of hosting the Cup. They estimated 269,000 visitors will come to Vancouver as a result of the tournament and stay for an average of 2.7 nights.

Together, the visitors are expected to spend an estimated $139 million.

The agencies then extrapolated the visitor numbers over the next five years, presuming “a mix of repeat visitors motivated to visit B.C. sooner or more frequently because of the awareness and interest in the province created by FIFA, and first-time visitors coming to B.C. because of FIFA.”

On those assumptions, the modelling shows that “conservatively, we can expect over 900,000 incremental out-of-province visitors, and over $1 billion in incremental visitor spending from 2026 to 2031.”

In the absence of an unredacted copy, you’ll just have to take the ministry’s word for those projections and the assumptions, however debatable, that went into them.

But from experience, governments tend to understate the costs and overstate the benefits of hosting events like the Cup.

The 2010 Winter Olympics were going to pay for themselves, according to Premier Gordon Campbell. Provincial government costs alone approached $1 billion, not including security, which was another $1 billion. The Campbell government estimated that the Games would generate an $11 billion boost for the provincial economy and 250,000 jobs, neither of which materialized.

At about the same time, a U.K. government study warned about the inevitable cost overruns on staging the Olympics and said the main benefit would be “the feel-good factor.” The U.K. nevertheless went ahead and staged the 2012 Summer Games in London.

Politicians embrace these spectacles because, for the most part, so does the public.

But hosting the tournament for the fun of hosting it, is the only part of the premier’s rationale you can take to the bank.

Sign up to receive daily headline news from the Vancouver Sun, a division of Postmedia Network Inc.

Thanks for signing up!

A welcome email is on its way. If you don’t see it, please check your junk folder.

The next issue of Vancouver Sun Headline News will soon be in your inbox.

We encountered an issue signing you up. Please try again