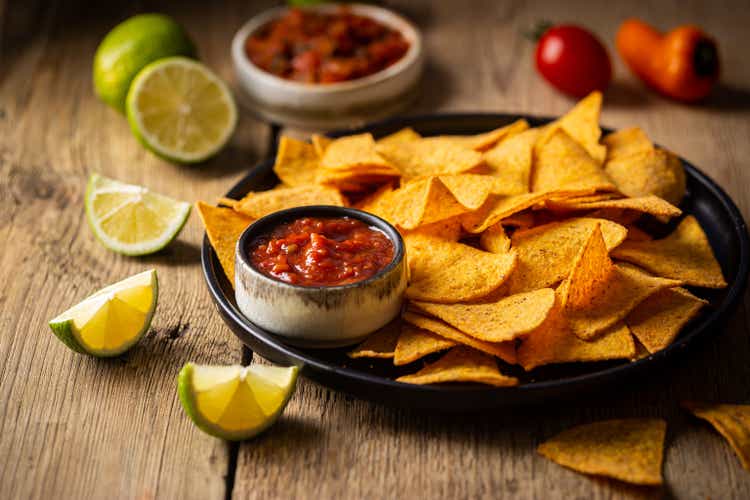 Seems my hedge fund buddy flew to Europe and got to stay in his expensive hotel with Covid. He’s fine and I’m better with his attention on sending me Micron Technology (NASDAQ:MU) research. Now he’s impatient to hear what nuggets were contained in this 205-page pile.

So what’s the essence of what these two research powerhouses are saying? Here’s my cheat sheet:

Let’s ignore the fact that these basic numbers in Bernstein’s report disagree in Exhibit 1 (lower) from the detailed income statement in Exhibit 333. (Atrocious proofreading, or total lack or explanation on differences, duly noted.) Used non-GAAP EPS from both reports. Bernstein’s report carries a date of March 2022 and is watermarked March 8. Goldman’s report is March 10, 2022.

Readers here know that I liked Mark Newman, who used to do semi-research for Bernstein. Newman has moved on to Nyobolt Battery as Chief Commercial Officer. Why do we care? Because Bernstein usually employs some great analysts. Newman was formerly a director of strategic planning at Samsung. So he wasn’t what Warren Buffet was afraid of in this quip:

Wall Street is the only place that people ride to in a Rolls Royce to get advice from those who take the subway.

Newman was often wrong on stock timing calls, but was usually great on analysis. Plus, his graphics were often better than the current crew. I’m still dialing in on the current crew who has a highfalutin professorial tone in some of their writing. May they prove as accurate as Newman was, since they are very positive about Micron in this 195-page report, even while exhibiting neuroses about the industry.

As I posted previously, Micron was the only company to get a solo call out in the Portfolio Manager’s Summary:

We’re particularly impressed with Micron for its consistent and continued improvement, and its technology leadership currently.

The other players were lumped into this group jumbo:

With better consolidation, DRAM profitability is superior to NAND, but NAND’s faster growth and the synergy between the two can’t be ignored. Hence, we believe Samsung, SK hynix, and Micron are better positioned because they have both NAND and DRAM business, but other major suppliers only have NAND business.

But one need only turn the page to find that this schizophrenic new Bernstein semi team, who praises Micron for tech leadership then rates the entire industry underperforms, giving Micron a price target of $58. I think their praise on tech leadership is amply deserved and their negative call on the stock is just wrong.

The Bernstein report is rife with wonky statistical discussion, huge typos, a general lack of close analysis of the macro scene, and not enough appreciation of Micron’s huge technological lead in some areas which might allow them to shine even in the flat to down industry Bernstein seems to expect.

Here’s a classic example of one of their typos:

The biggest upside risk to our target price for Samsung Electronics Co Ltd, SK hynix Inc, and Micron Technology Inc is an earlier end of oversupply, which can be a result of better demand or lower supply.

Well Virginia, the “…end of oversupply….” would be a huge positive, not an “upside risk” as they write.

And while we’re on the subject of oversupply, compare this Bernstein exhibit to the one from Goldman below.

Note that the Goldman graph, below, shows DRAM in undersupply for the same periods. Both graphs cannot be correct. From news reports and other research reports, I’m siding with Goldman on this one.

What about wonkiness? How is this for a chart?

I promise you none of the hedge fund principals I’ve spoken with are basing their buy/sell decisions on the kurtosis or skewness of DRAM spot price. (Isn’t there a mouthwash for kurtosis?) Portfolio analysts spouting this mumbo jumbo to the portfolio managers would be short-lived. More relevant, but still wonky, are pages of analysis on regression of stock prices and memory spot prices. But I will spare you.

And relative positioning roadmaps and timetables like this one on NAND:

HOLD THE PRESSES! BERNSTEIN UPDATE. I originally submitted this article to Seeking Alpha on March 15. I pulled it back to add this section after I received Bernstein’s update of March 16. Here’s their slide showing the Black Book estimates, shown above, along with their current numbers:

Bernstein now thinks a $94 price target is more appropriate than the $58 number they’d featured in the Black Book less than two weeks ago. Their telescope has lengthened and sharpened, and they now offer up a 2024 revenue estimate of 48.6 billion, and fully diluted non-GAAP EPS of $17.3 per the Exhibit above. The Black Book didn’t have 2024 numbers even though it was produced just two weeks ago.

Why the change of heart? I suspect the sloppy Black Book produced howls from institutional investors who took this new analyst team to task. Whatever the cause for the change, Bernstein now has some positive macro and industry factors which they must just have noticed, but which I believe were extant when they inked the Black Book. They now feel:

And this on DRAM:

And here is a graphic, illustrating the aforementioned DDR5 growth:

My hat is off to Bernstein for putting out an update and thus repudiating much of what they wrote in the massive Black Book two weeks ago.

They are writing this report after channel checks, where they found positives:

Goldman’s bullishness on the industry is driven by a tighter undersupply situation as shown in these two exhibits:

And here is Goldman’s investment thesis:

While the demand side of the equation warrants scrutiny given potential negative implications from geopolitical instability, inflation, and rising rates, we believe 1) disciplined capital spending by the industry, particularly in NAND, 2) tightness in Wafer Fab Equipment (which, in our view, caps any potential upside to supply growth over the next 12-18 months), and 3) the recent incident at WD/Kioxia, will collectively keep DRAM and NAND supply growth in check for the foreseeable future. [Emphasis by Goldman]

Both Goldman and Bernstein are research powerhouses. In the horse race of these two reports and sets of estimates, I strongly favor Goldman. Both reports were written before the current China Covid lockdowns, but we know from past such events there is short term pain followed by medium- and longer-term memory price firming.

I miss Mark Newman writing these tomes for Bernstein.

I’m long a bundle of January 2023 call options on which I have been writing weekly OTM calls.

Let’s finish the Ukraine war, God Bless them, and get China off lockdown. Then watch all of the memory stocks, but especially Micron, soar to new levels. Good luck!