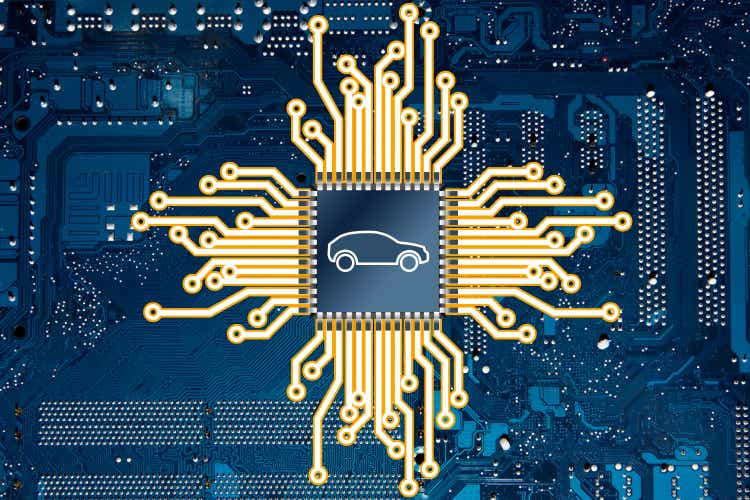 Global light vehicle unit sales are transitioning from ICE (internal combustion engine) to EV (electric vehicles). Chart 1 shows that the QoQ change in the past three quarters of 2021 of BEV (battery EV) shipments was significantly greater than overall automobile shipments.

Chart 2 shows that BEV + PHEV (plug-in hybrid vehicle) total light vehicle sales recovering by only 4.6% from the crisis year of 2020, the 108% growth of EVs means doubling their market share.

Not only are vehicle shipments and revenue recovering, but more semiconductors are being used each year, as shown in Chart 3, according to The Information Network’s report entitled “Hot ICs: A Market Analysis of Artificial Intelligence (“AI”), 5G, Automotive, and Memory Chips.” The automotive semiconductor market will be one of the leading drivers to the overall global semiconductor market.

During this 2015-2025 period, the greatest growth in content per will be exhibited by ADAS (Advanced Driver Assistance System), growing at a CAGR (Compound Annual Growth Rate) of 26% compared to the total semiconductor market growth of 10%. I discussed ADAS in a December 13, 2021 Seeking Alpha article entitled “Intel’s Mobileye: Strong Headwinds From Competitor SoCs, Particularly In China.”

Table 1 lists five of the leading semiconductor companies based on automotive revenues for 2021.

Infineon is the largest automotive semiconductor company, with 44% of its corporate revenues generated from the automotive sector. Power semiconductors comprised 50% of revenues in 2021, down from 55% in 2019. But Infineon leads the power semiconductor market with a 25% share, and the company’s increasing emphasis on adopting Silicon Carbide will be a strong driver in the EV market, according to The Information Network’s report entitled “Power Semiconductors: Markets, Materials and Technologies.”

STMicroelectronics makes a range of chips that are widely used in mobile phones, cars, 5G equipment and other electronic devices. The company, whose customers include Apple and Tesla, increased its investment again for 2021 to $2.1 billion, from $1.28 billion in 2020, and plans to increase capex to $3.4 billion and $3.6 billion in capital spending in 2022.

To boost semiconductor content in the average car over time and thus increase sales, NXPI is concurrently positioning in the three major trends: (1) ADAS, (2) EVs, and (3) connected infotainment.

ON Semi makes power and discrete products used in applications such as sensors, imaging and electric motors. In image sensors, the company has a 40% market share of the ADAS market. ON’s earnings crushed the street consensus badly. One of the drivers for this is ON’s move to silicon carbide (“SiC”) for its IGBT power semiconductors for autos.

DRAM has a variety of uses in modern vehicles, including the graphic functions of instrument cluster and infotainment systems. Cameras and sensors in ADAS and self-driving vehicles need the bandwidth and capacity of DRAM to process the incoming data. All of this data must in turn be processed, wired, and routed through the car through various electronic control units (ECUs). The more data that is generated in car, the greater the compute/bandwidth requirements will be. Micron holds nearly 50% of the global automotive memory market, and has a wide range of DRAM and NAND.

Connected cars generate up to 25GB of data an hour. Depending on the architecture of the vehicle, ADAS, and autonomous vehicle (“AV”) sensors can generate between 4TB and 20TB each day. This data must be processed in real time so that compute-centric, artificial intelligence (“AI”)-powered systems can react instantaneously, making modern vehicles the ultimate intelligent edge devices. The amount of memory and storage required to fuel these data-intensive systems has led to making the automotive memory industry one of the fastest-growing segments of the semiconductor market.

Chart 4 shows the Seeking Alpha Quant Rankings of these five companies. ON Semi has the best sector rank of 8th out of 588 in the Information Technology and 4th out of 62 in the Semiconductor Industry. Micron was a close second ranking 16/588 and 6/62.

In Quant Rankings, Micron ranked highest, particularly Profitability, as shown in Chart 5. On Semi was next, but with a C+ in valuation, affecting its overall ranking.

Chart 6 shows Rankings of the six companies. Micron was rated a Strong buy in Quant Rating and Wall Street Analyst Rating. Again, ON Sem was second.

On the negative side according to an article In Ford Authority:

New car affordability has plunged to new depths over the past year, thanks to a variety of factors. The semiconductor chip shortage and various supply chain issues caused by the pandemic are mostly to blame, as those problems have resulted in low inventory levels and record-high prices, both in the new and used vehicle market, as well as virtually non-existent new vehicle incentives.

Chart 8 shows that new vehicle affordability dropped once again in December, 2022 as the number of median weeks of income needed to purchase the average new vehicle rose to 43.2 weeks compared to 42.1 weeks in November. This decline in affordability was aided by a new record average price paid for a new vehicle of $47,077, along with the worst month for incentives in 20 years.

These data are through December 2021. Inflation has increased to 8.5% in the U.S. This will prove a setback for the auto industry as consumers debate the purchase of a high-ticket item when food and gasoline prices are rising at extraordinary levels.