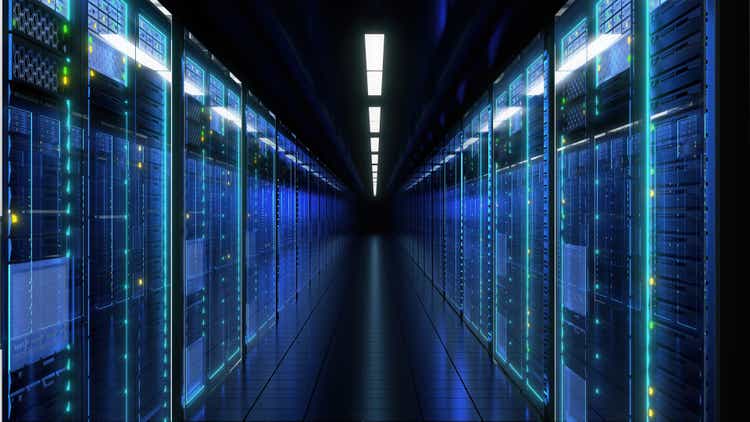 In the past few days, there have been positive comments that will provide a near-term impact Micron (NASDAQ:MU):

In this article and as a prelude to Micron’s Investor Day on May 12, 2022, I discuss these issues, as well as actual revenue metrics from Micron and competitors Samsung Electronics and SK Hynix.

According to the Merrill research report referenced above, the analyst noted that spending on cloud computing has been “resilient” so far, despite global worries over a resurgence in COVID cases in China, a broader economic slowdown and rising inflation.

Shown in Chart 1 are Micron’s revenues for its Networking (CNBU) and Storage (SBU) business units between F1Q 2019 (ending November 2018) and F2Q 2022. Much of the growth has come from Networking CNBU revenues (green bar), increasing at $250 per year according to its trendline (green dotted line). Storage SBU revenues have been flat.

Also, I added to this chart Cloud Capex spend (red bar), which shows a strong correlation between Micron’s CNBU revenues. Note that cloud capex for the companies listed below, was nearly $160 billion in 2021, so I reduced these figures by a factor of 10 to fit in the graph. Capex spend grew at a CAGR of 34.8% between 2019 and 2021, according to The Information Network’s report entitled “Hot ICs: A Market Analysis of Artificial Intelligence (“AI”), 5G, Automotive, and Memory Chips.”

In Chart 2, I show my forecast for YoY percent change in Cloud Capex spend of the top hyperscaler companies in 2021 and 2022. These include Baidu (BIDU) Amazon, Tencent (OTCPK:TCEHY), Microsoft, Alibaba (BABA), Meta (FB), and Google.

Cloud revenue more than doubled year-over-year as hyperscalers expanded their internal infrastructure deployments, and 70 new AMD-powered instances launched from Alibaba, Amazon, Baidu Cloud, Microsoft Azure, Google and others. There are now more than 460 AMD-based cloud instances available from the largest hyperscalers, with additional instances on track to launch in the coming quarters.

This is a positive for Micron. As part of a “long-running collaboration” between chipmaker and Micron, which also includes validating AMD’s products on Micron’s DDR5 memory and SSD technologies, Micron is now using AMD’s newly announced third-generation EPYC server CPUs to power most of its high-demand applications for designing memory and storage chips.

Memory companies have reported Q1 2021 earnings this past week responding to server growth.

Samsung Electronics said the solid chip demand
for servers and high-end applications dwarfed macroeconomic uncertainties and supply chain issues due to Russia’s invasion of Ukraine and pandemic lockdowns in China. In particular, it saw an upshot in memory chip sales thanks to the slower-than-expected memory chip price decline propped up by a solid demand for servers in data centers.

SK Hynix saw its best first-quarter revenue in history, while its operating profit jumped more than twofold compared to the previous year, despite weakening demand for consumer electronics and external uncertainties such as lockdowns in parts of China and Russia’s invasion of Ukraine. According to an earnings guidance, SK Hynix reported 12.16 trillion won ($9.63 billion) in revenue for the first quarter, up 43 percent on-year. Noh Jong-won, President and Chief Marketing Officer of SK Hynix, anticipates demand for memory chips for servers will remain solid throughout this year thanks to a data-center boom in 2018. He added that the lockdowns in China remain a concern.

Micron reported earnings a month earlier. Sanjay Mehrotra, President and Chief Executive Officer, reported that in 2021, data center became the largest market for memory and storage, eclipsing the mobile market. Looking ahead, he expects data center demand growth to outpace the broader memory and storage market over the next decade, fueled by secular drivers in cloud and healthy enterprise IT investment. In the recent fiscal second quarter, data center revenue grew more than 60% year over year, supported by robust demand across our DRAM and SSD portfolio.

At the end of December 2021, SK Hynix announced that it had completed the first phase of the transaction to acquire Intel’s (INTC) NAND and solid-state drive (“SSD”) business. The newly established U.S. subsidiary, which will manage the newly acquired SSD business, will be known as “Solidigm”.

NAND revenue for Micron and Samsung increased 4% and 10%, respectively.

Shipments for Micron were flat while Samsung increased 7%.

NAND ASPs are shown in Chart 5. ASPs for Micron and SK Hynix increased 5% and 2%, respectively, while Samsung decreased 5%.

NAND operating profit margin is shown in Chart 6. SK Hynix overtook Micron on the strength of the Solidigm acquisition.

The relationship between AMD and MU in the cloud business cannot be underestimated. AMD doubling of revenues to hyperscalers Alibaba, Amazon, Baidu Cloud, Microsoft Azure, Google are the same companies I detailed in Chart 2.

Seeking Alpha’s Factor Grades are all B and above and have been improving in the past three months in all factors except Momentum.

Concerns about inflation and possible recession are impacting share price. A Fox News Poll released in the past week shows 43% of respondents think inflation will be a major issue for more than a year.

This is a strong headwind and we see it in Chart 7. When consumers are impacted by inflation, discretionary funding drops for gadgets containing semiconductors drops. I rate the stock a buy based on fundamentals and the tailwinds discussed in this article.

In my Semiconductor Deep Dive Marketplace newsletter of the same title, I also discussed the DRAM metrics for the three companies.