A $1,000 investment in Nvidia (NASDAQ: NVDA) in 2012 would be worth $57,000 today. That’s what can happen when you invest in a growing tech company that experiences expanding use cases for its products. Nvidia successfully applied its graphics processing units (GPUs) to new markets like the data center, as opposed to relying on demand from PC gamers, and revenue exploded.

Micron Technology (NASDAQ: MU) could see a similar growth opportunity over the next decade. It’s one of the leading producers of dynamic random-access memory (DRAM) modules and non-volatile flash memory (NAND) used in solid-state drives. Vehicles, phones, data centers, and the Internet of Things (IoT) are getting more complicated technologically, and that’s good news for Micron. More advanced features and data consumption means higher demand for its memory and storage solutions, and Micron is already reporting strong revenue growth in 2022 because of these trends.

Could buying shares of Micron today lead to Nvidia-like returns over the next 10 years? Let’s find out. 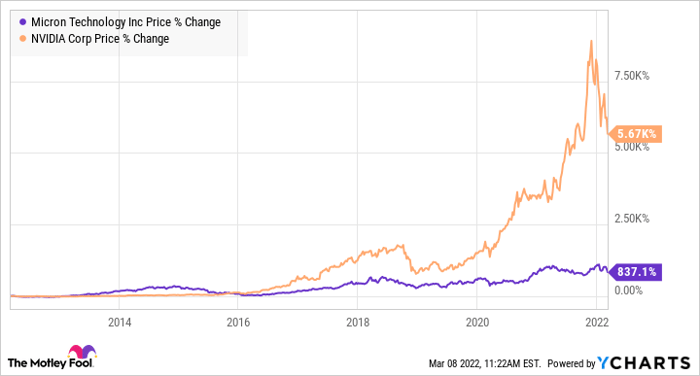 A lot has changed in six years

It’s telling to compare Micron’s annual report from fiscal 2015 to fiscal 2021. Six years ago, there was no mention of artificial intelligence, IoT, driver-assistance systems, or high-resolution smartphone cameras — all of which are now contributing to Micron’s growth in 2022.

Cloud computing, which is included in Micron’s storage business unit, is another monster growth opportunity. This business reported 5.5% revenue growth last year, but more specifically, data-center revenue grew 70% over the year-ago quarter in the most recent quarter. Last year, Micron was first to market with its 176-layer NAND flash memory that is used in data center solid-state drives (SSDs).

Data center is the largest market for memory and storage. Management sees a strong ramp-up of data center SSD revenue continuing in the next quarter.

Mobile revenue increased 25% in the fiscal first quarter, and management sees continued growth in this market as the 5G upgrade cycle continues. Higher demand coming from the data center and mobile markets puts Micron on pace to have a record year in terms of revenue, based on management’s outlook. 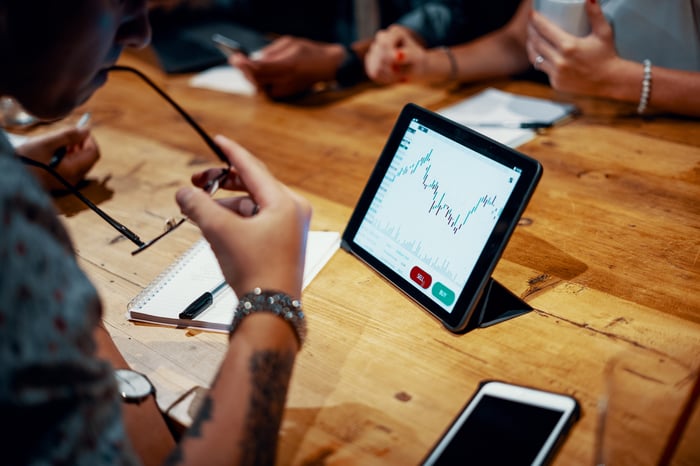 First, it announced an investment of up to $150 billion through 2030 in manufacturing and research and development. Second, Micron initiated a quarterly dividend of $0.10 per share. Note that in 2012, just as Nvidia was about to deliver wealth-building returns to investors, the graphics specialist initiated its first-ever quarterly dividend. Investors should take Micron’s dividend seriously.

Is Micron the next Nvidia?

Despite all these positive indicators, the stock continues to trade at an unbelievable value of just 8.3 times this year’s profit forecast. The stock could certainly deliver market-beating returns to investors from this low valuation level.

However, there is one key difference between Micron and Nvidia that investors should know about. When Nvidia began its run 10 years ago, it was already the dominant leader in GPUs. Nvidia’s only competition was Advanced Micro Devices. Micron doesn’t have this luxury. The market for DRAM and NAND technology is much more competitive, with Micron currently sitting in third place behind Samsung and SK Hynix.

Still, Micron’s expanding profit margin is evidence that it is doing something different. Over the last 10 years, Micron’s operating margin has trended up from negative territory to a high 29%, which is well above the corporate average. It’s close to Nvidia’s operating margin of 37%. 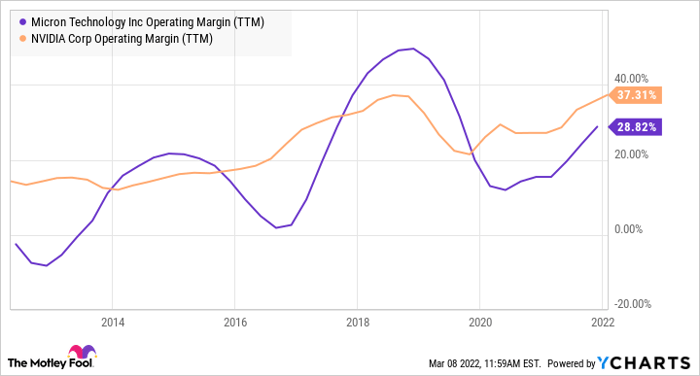 Last year’s launch of 176-layer NAND and 1-alpha DRAM were breakthroughs that pushed Micron to a leadership position in the industry.

All in all, investors shouldn’t count on earning a 50-fold return on investment, because that level of return is not common. But Micron is benefiting from powerful forces in the world of technology, such as increasing chip content in products we use every day that should lead to a growing business. There’s a good chance the stock will significantly outperform the broader market through 2032.

10 stocks we like better than Micron Technology
When our award-winning analyst team has a stock tip, it can pay to listen. After all, the newsletter they have run for over a decade, Motley Fool Stock Advisor, has tripled the market.*

They just revealed what they believe are the ten best stocks for investors to buy right now… and Micron Technology wasn’t one of them! That’s right — they think these 10 stocks are even better buys.